Sara Teasdale was born on August 8, 1884 in St. Louis, Missouri. Her marriage failed in the form of divorce. She drowned in the bath of her bedroom in New York in 1933. Even after her departure from the world. She is alive in the hearts of people and her poetry is met with great interest. 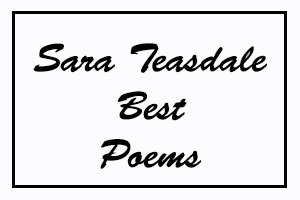 Aloof as aged kings.
Wearing like them the purple,
The mountains ring the mesa
Crowned with a dusky light;
Many a time I watched
That coming on of darkness
Till stars burned through the heavens
Intolerably bright.
It was not long I lived there,
But I became a woman
Under those vehement stars,
For it was there I heard
For the first time my spirit
Forging an iron rule for me,
As though with slow cold hammers
Beating out word by word:
“Take love when love is given,
But never think to find it
A sure escape from sorrow
Or a complete repose;
Only yourself can heal you,
Only yourself can lead you
Up the hard road to heaven
That ends where no one knows.”

I listened, there was not a sound to hear
In the great rain of moonlight pouring down,
The eucalyptus trees were carved in silver,
And a light mist of silver lulled the town.

I saw far off the gray Pacific bearing
A broad white disk of flame,
And on the garden-walk a snail beside me
Tracing in crystal the slow way he came.

I must have passed the crest a while ago
And now I am going down –
Strange to have crossed the crest and not to know,
But the brambles were always catching the hem of my gown.

All the morning I thought how proud I should be
To stand there straight as a queen,
Wrapped in the wind and the sun with the world under me –
But the air was dull, there was little I could have seen.

It was nearly level along the beaten track
And the brambles caught in my gown –
But it’s no use now to think of turning back,
The rest of the way will be only going down.

It was a night of early spring,
The winter-sleep was scarcely broken;
Around us shadows and the wind
Listened for what was never spoken.

Though half a score of years are gone,
Spring comes as sharply now as then –
But if we had it all to do
It would be done the same again.

It was a spring that never came;
But we have lived enough to know
That what we never have, remains;
It is the things we have that go.

Let It Be Forgotten

If anyone asks, say it was forgotten
Long and long ago,
As a flower, as a fire, as a hushed footfall
In a long-forgotten snow.

There was a bush with scarlet berries.
And there were hemlocks heaped with snow,
With a sound like surf on long sea-beaches
They took the wind and let it go.

The hills were shining in their samite
Fold after fold they flowed away;
“Let come what may,” your eyes were saying,
“At least we two have had today”.

The park is filled with night and fog,
The veils are drawn about the world,
The drowsy lights along the paths
Are dim and pearled.

I Shall Not Care

When I am dead and over me bright April
Shakes out her rain-drenched hair,
Though you should lean above me broken-hearted,
I shall not care.

I shall have peace, as leafy trees are peaceful
When rain bends down the bough;
And I shall be more silent and cold-hearted
Than you are now.

Oh, is it not enough to be
Here with this beauty over me?
My throat should ache with praise, and I
Should kneel in joy beneath the sky.
O beauty, are you not enough?
Why am I crying after love
With youth, a singing voice, and eyes
To take earth’s wonder with surprise?

Why have I put off my pride,
Why am I unsatisfied, –
I, for whom the pensive night
Binds her cloudy hair with light, –
I, for whom all beauty burns
Like incense in a million urns?
O beauty, are you not enough?
Why am I crying after love? 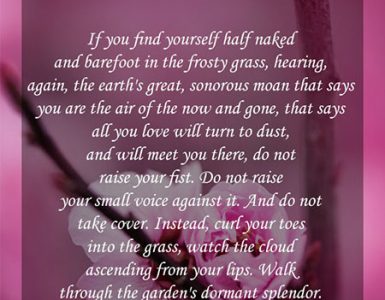