10 Famous Poems About Self Love & Confidence That Rhyme

Here we have collected beautiful and short poems about self love for you that will boost your self-confidence and show how important you are to your family and other people.

I Love Being Me
by Gemma Hayton

You see, this is my life
as others would see
they don’t know what it’s like
to really be me

So maybe I can’t run the fastest
maybe I can’t kick a ball
but I wouldn’t change being me
not for you, not at al

Be Yourself
by Ellen Bailey

Trying to live the life of another is a mistake
It is a masquerade; nothing more than a fake
Be yourself and let your qualities show through
Others will love you more for being just you

A State of Mind
by AWalter D. Wintle

If you think you’ll lose, you’re lost
For out in the world you’ll find,
Success begins with a fellow’s will
It’s all in a state of mind

For many a game is lost
Ere even a play is run,
And many a coward fails
Ere even his work is begun

Life battles don’t always go
To the stronger or faster man
But sooner or later, the man who wins
Is the fellow who thinks he can

A Lesson From History
by Joseph Morris

Everything’s easy after it’s done;
Every battle’s a ‘cinch’ that’s won;
Every problem is clear that’s solved
The earth was round when it revolved!

But Washington stood amid grave doubt
With enemy forces camped about;
He could not know how he would fare
Till after he’d crossed the Delaware.

Though the river was full of ice
He did not think about it twice,
But started across in the dead of night,
The enemy waiting to open the fight.

Likely feeling pretty blue,
Being human, same as you,
But he was brave amid despair,
And Washington crossed the Delaware!

So when you’re with trouble beset,
And your spirits are soaking wet,
When all the sky with clouds is black,
Don’t lie down upon your back

And look at them. Just do the thing;
Though you are choked, still try to sing.
If times are dark, believe them fair,
And you will cross the Delaware! 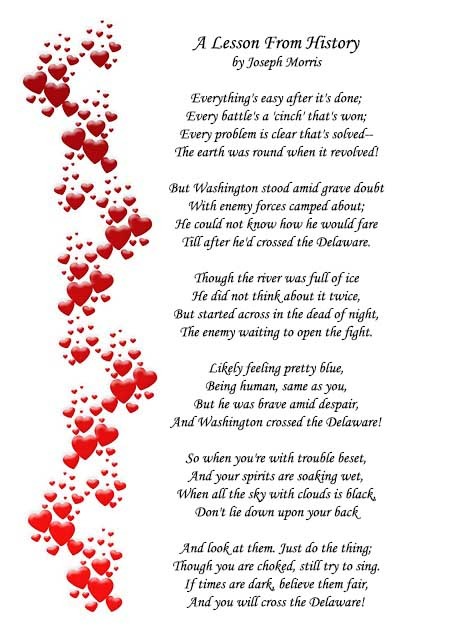 I’ve dreamed many dreams that never came true,
I’ve seen them vanish at dawn,
But I’ve realized enough of my dreams thank the Lord,
To make me want to dream on,

I’ve prayed many prayers when no answer came,
Though I’ve waited patient and long,
But answers have come to enough of my prayers,
To make me keep praying on,

I’ve trusted many a friend that failed,
And left me to weep alone,
But I’ve found enough of my friends that are really true,
That will make me keep trusting on.

I’ve sown many seeds that have fallen by the way,
For the birds to feed upon,
But I’ve held enough golden sheaves in my hand,
To make me keep sowing on.

I’ve drunk from the cup of disappointment and pain,
I’ve gone many days without song,
But I’ve sipped enough nectar from the Roses of Life,
To make me keep living on! 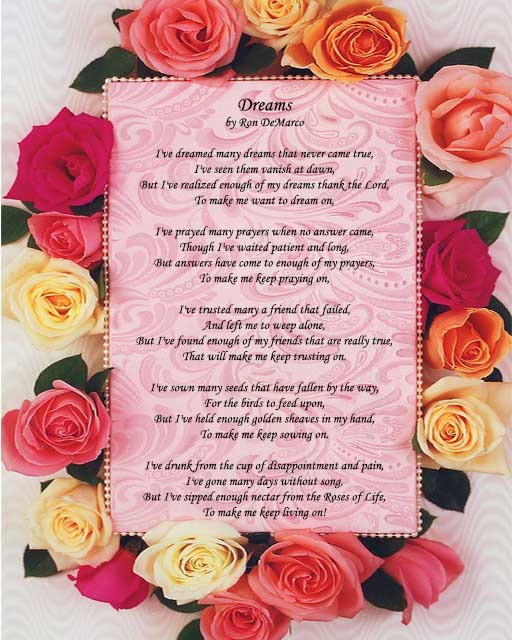 Live Each Moment
by Anonymous

I may never see tomorrow,
there is no written guarantee.
And things that happened yesterday,
belong to history

I cannot predict the future,
I cannot change the past
I have just the present moment,
I must treat it as my last

I must use this moment wisely,
for it will soon pass away
And be lost to me forever,
as part of yesterday

I must exercise compassion,
help the fallen to their feet.
Be a friend unto the friendless,
make an empty life complete

The unkind things I do today,
may never be undone
And friendships that I fail to win,
may never more be won

I may not have another chance
on bended knee to pray
And thank God with humble heart,
for giving me this day

My Darling
by Nikita Gill

The universe wove you from a constellation,
just so atom, every fibre in you comes from
a different star.

Together, you are bound by stardust , altogether
spectacularly created by the energy of the
universe itself.

Accept Yourself as a Work in Progress
by Reyna Biddy

and make light of them. no one can tear you down if
you make peace with who you are and where you’ve
been. if you are going to focus on the negative at all,
focus on turning them into positives. focus on growing.

and you always will be. you’re much more powerful
when you believe in yourself. if you don’t love
all of you, who will?
give yourself time to blossom.

I am the walls

Forgive her, and she

Will forgive you, too

No matter how many times

You asked her to break

—my relationship with my body

Change of Attitude
by Vivien Wade

The optimist knows the sun shines,
Above the clouds, though gray,
The pessimist sees the dark side
Of a gloomy cold winter’s day.

The optimist says “keep on going.
don’t give up when troubles annoy”.
The pessimist thinks “what’s the use,
life’s dull and holds little joy”.

The optimist is always thankful,
For the blessings of each day.
The pessimist keeps complaining
Of things that come his way.

The optimist and the pessimist,
Are opposites to the extreme;
While one sees opportunities,
The other only a broken dream.

Are you an optimist or a pessimist,
Do you see mud not the stars?
Like the two men in prison,
Looking out through prison bars.

Choose to become an optimist,
The negative thoughts cast out,
Replace them with positive ones,
Then life will be better, no doubt

Courage
by Edgar A. Guest

Courage isn’t a brilliant dash,
A daring deed in a moment’s flash;
It isn’t an instantaneous thing
Born of despair with a sudden spring

It isn’t a creature of flickered hope
Or the final tug at a slipping rope;
But it’s something deep in the soul of man
That is working always to serve some plan.

Courage isn’t the last resort
In the work of life or the game of sport;
It isn’t a thing that a man can call
At some future time when he’s apt to fall;

If he hasn’t it now, he will have it not
When the strain is great and the pace is hot.
For who would strive for a distant goal
Must always have courage within his soul.

Courage isn’t a dazzling light
That flashes and passes away from sight;
It’s a slow, unwavering, ingrained trait
With the patience to work and the strength to wait.

It’s part of a man when his skies are blue,
It’s part of him when he has work to do.
The brave man never is freed of it.
He has it when there is no need of it.

Courage was never designed for show;
It isn’t a thing that can come and go;
It’s written in victory and defeat
And every trial a man may meet.

It’s part of his hours, his days and his years,
Back of his smiles and behind his tears.
Courage is more than a daring deed:
It’s the breath of life and a strong man’s creed. Short Funny Love Poems For Him & Her That Rhyme

Cute funny love poems to express your romantic emotions in a cheerful, humorous manner. Share these funny love poems with your girlfriend or boyfriend and enjoy your love relation. Funny Love Poems For Her All About... 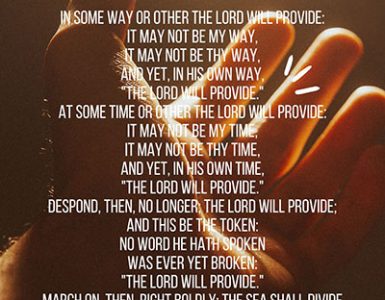 God will provide us at the right time, His time is the right time. His provisions are beyond our imagination. All we need is to trust God. God Will Provide Poems will strengthen faith in God. Table of Contents The Lord...