Robert Frost (1874-1963) was a famous American poet. He was a romantic and poet of nature. He has won many awards for his excellent poetry, including the Pulitzer Prize. His poetry became so popular that it was published in England before it was published in America. Let’s look at some of his famous poems. 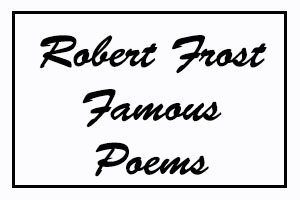 I didn’t like the way he went away.
That smile! It never came of being gay.
Still he smiled – did you see him? – I was sure!
Perhaps because we gave him only bread

And the wretch knew from that that we were poor.
Perhaps because he let us give instead
Of seizing from us as he might have seized.
Perhaps he mocked at us for being wed,

Or being very young (and he was pleased
To have a vision of us old and dead).
I wonder how far down the road he’s got.
He’s watching from the woods as like as not.

The Road Not Taken

Two roads diverged in a yellow wood,
And sorry I could not travel both
And be one traveler, long I stood
And looked down one as far as I could
To where it bent in the undergrowth;

Then took the other, as just as fair,
And having perhaps the better claim,
Because it was grassy and wanted wear;
Though as for that the passing there
Had worn them really about the same,

And both that morning equally lay
In leaves no step had trodden black.
Oh, I kept the first for another day!
Yet knowing how way leads on to way,
I doubted if I should ever come back.

I shall be telling this with a sigh
Somewhere ages and ages hence:
Two roads diverged in a wood, and I –
I took the one less traveled by,
And that has made all the difference.

Some say the world will end in fire,
Some say in ice.
From what I’ve tasted of desire
I hold with those who favor fire.
But if it had to perish twice,
I think I know enough of hate
To say that for destruction ice
Is also great
And would suffice.

Nothing Gold Can Stay

Nature’s first green is gold,
Her hardest hue to hold.
Her early leaf’s a flower;
But only so an hour.
Then leaf subsides to leaf.
So Eden sank to grief,
So dawn goes down to day.
Nothing gold can stay.

When I see birches bend to left and right
Across the lines of straighter darker trees,
I like to think some boy’s been swinging them.
But swinging doesn’t bend them down to stay.

Ice-storms do that. Often you must have seen them
Loaded with ice a sunny winter morning
After a rain. They click upon themselves
As the breeze rises, and turn many-colored

As the stir cracks and crazes their enamel.
Soon the sun’s warmth makes them shed crystal shells
Shattering and avalanching on the snow-crust–
Such heaps of broken glass to sweep away

You’d think the inner dome of heaven had fallen.
They are dragged to the withered bracken by the load,
And they seem not to break; though once they are bowed
So low for long, they never right themselves:

You may see their trunks arching in the woods
Years afterwards, trailing their leaves on the ground
Like girls on hands and knees that throw their hair
Before them over their heads to dry in the sun.

But I was going to say when Truth broke in
With all her matter-of-fact about the ice-storm
(Now am I free to be poetical?)
I should prefer to have some boy bend them

As he went out and in to fetch the cows–
Some boy too far from town to learn baseball,
Whose only play was what he found himself,
Summer or winter, and could play alone.

One by one he subdued his father’s trees
By riding them down over and over again
Until he took the stiffness out of them,
And not one but hung limp, not one was left

For him to conquer. He learned all there was
To learn about not launching out too soon
And so not carrying the tree away
Clear to the ground. He always kept his poise

To the top branches, climbing carefully
With the same pains you use to fill a cup
Up to the brim, and even above the brim.
Then he flung outward, feet first, with a swish,

Kicking his way down through the air to the ground.
So was I once myself a swinger of birches.
And so I dream of going back to be.
It’s when I’m weary of considerations,

And life is too much like a pathless wood
Where your face burns and tickles with the cobwebs
Broken across it, and one eye is weeping
From a twig’s having lashed across it open.

I’d like to get away from earth awhile
And then come back to it and begin over.
May no fate willfully misunderstand me
And half grant what I wish and snatch me away

Not to return. Earth’s the right place for love:
I don’t know where it’s likely to go better.
I’d like to go by climbing a birch tree,
And climb black branches up a snow-white trunk

Toward heaven, till the tree could bear no more,
But dipped its top and set me down again.
That would be good both going and coming back.
One could do worse than be a swinger of birches.

Always – I tell you this they learned –
Always at night when they returned
To the lonely house from far away
To lamps unlighted and fire gone gray,
They learned to rattle the lock and key
To give whatever might chance to be
Warning and time to be off in flight:
And preferring the out- to the in-door night,
They learned to leave the house-door wide
Until they had lit the lamp inside.

Love has earth to which she clings
With hills and circling arms about–
Wall within wall to shut fear out.
But Thought has need of no such things,
For Thought has a pair of dauntless wings.

On snow and sand and turf, I see
Where Love has left a printed trace
With straining in the world’s embrace.
And such is Love and glad to be.
But Thought has shaken his ankles free.

Thought cleaves the interstellar gloom
And sits in Sirius’ disc all night,
Till day makes him retrace his flight,
With smell of burning on every plume,
Back past the sun to an earthly room.

His gains in heaven are what they are.
Yet some say Love by being thrall
And simply staying possesses all
In several beauty that Thought fares far
To find fused in another star.

A Patch Of Old Snow

There’s a patch of old snow in a corner
That I should have guessed
Was a blow-away paper the rain
Had brought to rest.

It is speckled with grime as if
Small print overspread it,
The news of a day I’ve forgotten –
If I ever read it.

All out of doors looked darkly in at him
Through the thin frost, almost in separate stars,
That gathers on the pane in empty rooms.
What kept his eyes from giving back the gaze

Was the lamp tilted near them in his hand.
What kept him from remembering what it was
That brought him to that creaking room was age.
He stood with barrels round him–at a loss.

And having scared the cellar under him
In clomping there, he scared it once again
In clomping off;–and scared the outer night,
Which has its sounds, familiar, like the roar

Of trees and crack of branches, common things,
But nothing so like beating on a box.
A light he was to no one but himself
Where now he sat, concerned with he knew what,

A quiet light, and then not even that.
He consigned to the moon, such as she was,
So late-arising, to the broken moon
As better than the sun in any case

For such a charge, his snow upon the roof,
His icicles along the wall to keep;
And slept. The log that shifted with a jolt
Once in the stove, disturbed him and he shifted,

And eased his heavy breathing, but still slept.
One aged man–one man–can’t fill a house,
A farm, a countryside, or if he can,
It’s thus he does it of a winter night.

When I go up through the mowing field,
The headless aftermath,
Smooth-laid like thatch with the heavy dew,
Half closes the garden path.

And when I come to the garden ground,
The whir of sober birds
Up from the tangle of withered weeds
Is sadder than any words

A tree beside the wall stands bare,
But a leaf that lingered brown,
Disturbed, I doubt not, by my thought,
Comes softly rattling down.

I end not far from my going forth
By picking the faded blue
Of the last remaining aster flower
To carry again to you. 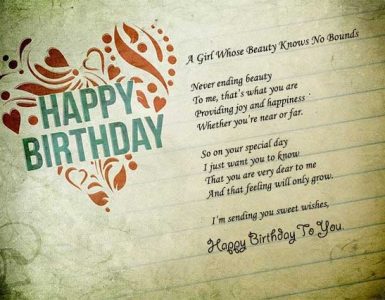 Birthday is a day that brings back a new spring in a person’s life. When we congratulate someone on a birthday, he is very happy and feel adopted. Wishes to your girlfriend on this important day with these... 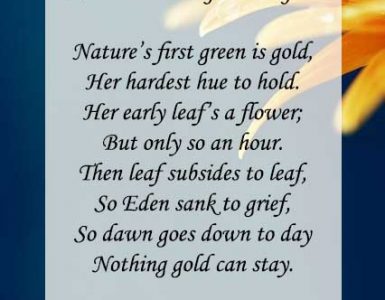 Short Poems to Comfort the Grieving the Lose of Loved One

Reading poems to comfort the grieving to yourself during the time of grief is a great way to bring comfort to those grieving over the loss of loved one. We’ve collected some famous poems that will reduce your...